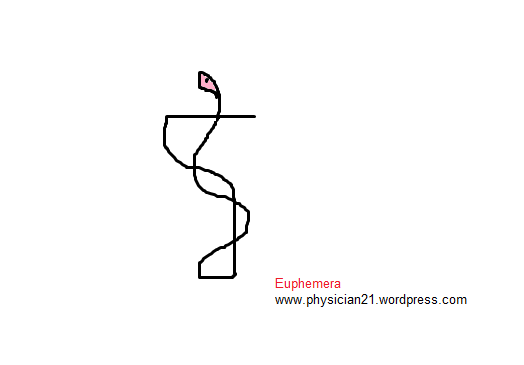 To coin a term or find a name of some meaning whether abstract or sensual could be the basic challenge that people face. From this point of view a good feeling and passion to language appears to be a prerequisite for a significant scientist.

In this essay I would like to throw light on a concept or a phenomenon regarding the action of drugs which I, at least for this time, would call ‘euphemera’. A typical medicine would be studied to know its properties which include physical, chemical, pharmacologic and clinical aspects. Euphemera (opposite would be also dysphemera) would like to imply the very initial feeling (effect) of the drug after its application or ingestion even before it is quite and fully distributed in the body partitions or compartments, even before it is well mixed in the stomach juice. In other words, whether the drug would have a nice and beneficial effect could/should be evident from the very beginning of taking it rather than after a while when it’s equilibrated in all body fluids. This concept or impression may denote a sort of illusion or a phenomenon that may not be amenable to study. Or, however, it may provide an interphase between science and predetermination (natural setup). Indeed, the medicinal substances my otherwise exert their effect very rapidly especially when they are taken in situations when they are most needed and, thence most effective (inundation moment).

In studying such a phenomenon of euphemera we may find out different versions like true euphemera and false euphemera. This may be of help to tell about, so that the person would be reassured about the very initial feelings when taking a medicine.