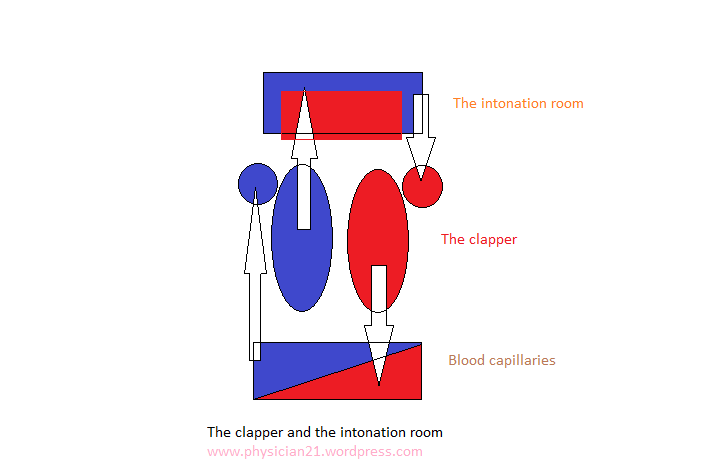 In medicine it is usually reasonable to consider the clapper (the heart) together with its intonation room (the lungs). The cardiorespiratory cycle may, therefore, be considered one entity and should be split only for simplicity. The academic question in this point is how the two phases of respiration are orchestrated with the two phases of cardiac cycle, from one side, and with the concurrent gas/metabolite exchanges in the lungs and tissues, from the other side. Although I did not yet look for an authenticated answer, I would like to present in this text a hypothetical model based on common sense and the concept of lung compliance.

The clapper has got in intrinsic rhythmicity and alternates between contraction (systole) and relaxation (diastole). Although the serial 4- station pass of blood (the cardiac cycle) would be very exciting, i.e. right atrium > right ventricle > left atrium (through the lungs) > left ventricle (to systemic circulation), and might be apparently conforming with the site of SAN and AVN and the path of nerve impulse conduction, a 2- station pass may be described in text books, in which model the right and left hearts are switched in parallel. Yet, to fulfill my scientific fantasy, even a minor right to left lag might be present.

The same idea may be applied on the left heart: left ventricular systole/ arterial recoil and capillary refilling > left ventricular diastole/ capillary resilience, when almost gas and metabolite exchange takes place between blood and tissues, i.e. again a more instantaneous than sloping model is suggested (2). The movement of fluid in the vicinity of the capillaries would follow a rather sloping model where a fluid outflow gradient on the arterial side of the capillary may be appropriately counterbalanced by another fluid inflow gradient on the venous side.

I may be eligible to confer this package of cardipulmonary assumptions the term: Gharabawy’s cardiorespiratory axioms. Though the right blood circulation may seem shorter than the left one, the total paths of deoxygenated and oxygenated blood seem to be equal. The two assumptions noted above as (1) and (2) can be represented as follows: 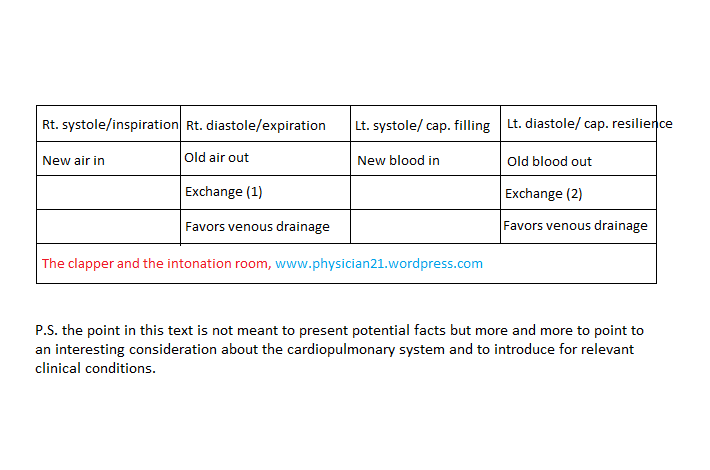 The choice and success of the academic and professional career is largely dependent on the way it is handled. In "physician21.wordpress.com" I wish to handle the medical profession in an attractive way that would grasp a bit "about medical tacts and talents". Let's try it. View all posts by physician21